"Carlos has proven to be a trusted advisor and exemplary advocate for local officals and community leaders in the Cumberland Valley and Lake Cumberland areas. As a Jackson County resident, he knows first-hand, the issues that our families and businesses face across Southern and Eastern Kentucky, and he never fails to communicate those needs across the local, state and federal levels," said Congressman Rogers. "He has dedicated countless hours and miles, traveling our wide-spread district to connect directly with local leaders and I appreciate his tireless work on behalf of our people."

"It is a tremendous honor to serve Congressman Rogers and the people of Southern and Eastern Kentucky. Jackson County has always been home for me, and just like so many others, I take great pride and joy in working to make our region a better place to live," said Cameron. "I look forward to developing more partnerships in every corner of the district as we continue to pave a path for a brighter future together." 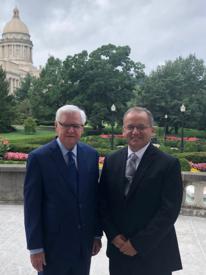