WASHINGTON, DC -- Today, U.S. Rep. Harold "Hal" Rogers (KY-05) spoke on the floor of the House urging members of Congress to vote for a four-week extension of the current Continuing Resolution to keep the government open, providing critical funding for the military and a six-year extension for the Children's Health Insurance Program (CHIP). The current stop-gap funding bill is set to expire at midnight on Friday, January 19, 2018.

"Mr. Speaker, I rise in support of this bill.

"Here it is in a nutshell: Chairman Frelinghuysen saw to it we passed all 12 of the appropriations bills and sent them to the Senate where not a single one has been allowed to come to the floor because of democrat senators who profess they want to keep the government going, but vote no. And because the democrats in the Senate have barred the consideration of any of these bills, here we are.

"This is the only chance we have to keep the government operating, to be sure that the American taxpayers' money is being spent properly and adequately, but for the purpose of keeping our government open. So, Mr. Speaker, I urge a yes vote on this bill, and let's move on. I yield back."

The funding bill passed the House and now heads to the U.S. Senate for consideration. 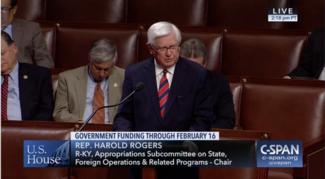