"I’m concerned in your proposed budget, your cuts to the office of education – in fact zero," said Rogers, Chairman Emeritus of the House Appropriations Committee. "The education programs, hopefully, have been spreading the word about NASA’s excitement. I can’t understand why you would want to cut that."

Morehead State University (MSU) and the University of Kentucky have utilized competitive education grant funding from NASA's EPSCoR and Space Grants to develop successful aerospace programs. Next week, MSU's aerospace programs will be featured during NASA's annual Technology Day on the Hill.

"Just in April, NASA deployed two CubeSats developed by the University of Kentucky and Morehead State University, as part of your ongoing Educational Launch of Nanosatellites Mission; the first time too two Kentucky satellites have been launched simultaneously," said Rogers. "Your investments have also promoted high retention for Kentucky’s STEM workforce."

Lightfoot testified that NASA is working to balance outreach and assessment programs more effectively, while maintaining partnerships with universities and STEM-related programs.

"That will be in the minds of those young people from here on. That's the kind of thing that I think we need to do more of, inspiring the up-and-coming young students who have no other way to understand and learn what space is all about," continued Rogers. "You've got the only classroom there is in space."

Lightfoot confirmed NASA plans to continue downlinks from the International Space Station and to host school groups at NASA locations.

To watch the full hearing, click the photo below or visit appropriations.house.gov. 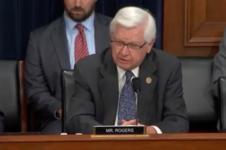