PIKEVILLE, Ky. (August 3, 2017) -- On Thursday, U.S. Rep. Harold "Hal" Rogers (KY-05) joined state and local leaders in Pikeville to break ground on the Kentucky Enterprise Industrial Park at Marion's Branch in Pikeville, Kentucky. The project is one of the first Abandoned Mine Lands (AML) Pilot Program projects in the country. Congressman Rogers has championed the AML Pilot Program in Washington since 2016 to help boost reclamation and economic development in coal producing states that have been hardest hit by the recent decline of the coal industry.

"The War on Coal left behind 12,000 laid off coal miners in Eastern Kentucky, but the outlook is much better standing on the mountaintop where economic developent and broadband connectivity are in the pipeline," said Congressman Rogers. "The AML Pilot Program is already helping restore our land, so we can create jobs, build upon our infrastructure and improve tourism opportunities across the region."

The $5 million grant will help construct a 50,000 square-foot spec building at the Kentucky Enterprise Industrial Park, which includes 400 acres of available reclaimed land.

Thus far, seven projects in Eastern Kentucky have been awarded AML Pilot Program grants through the Office of Surface Mining and Reclamation Enforcment and the Kentucky Energy and Environment Cabinet.

Since 2016, Congress has approved $195 million for the AML Pilot Program, of which Kentucky has received $55 million.

The Kentucky Enterprise Industrial Park has also received $34.6 million in grants and loans for the property purchase, construction of a new road and bridge, and new sewer, water and transmission lines. The infrastructure funding for the project was supported by the Kentucky Transportation Cabinet, the U.S. Army Corp of Engineers, U.S. Department of Agriculture Rural Development, the Economic Development Administration, a Community Development Block Grant, and coal severance money.

As part of the AML grant, conduit will be installed for high speed broadband through the KentuckyWired initiative that will provide 1 gigabyte service to the park.

The AML Pilot project is a joint effort by the Kentucky Cabinet for Economic Development, Department for Local Government, Kentucky Tourism, Arts and Heritage Cabinet and the Energy and Environment Cabinet, Division of Abandoned Mine Lands. 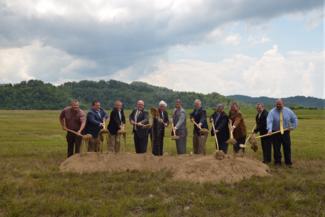