WASHINGTON, DC -- U.S. Rep. Hal Rogers (KY-05) applauds the U.S. House of Representatives for approving the fiscal year 2017 (FY17) Omnibus Appropriations bill. The nearly $1.2 trillion comprehensive spending bill will fund the federal government through September 30, 2017. The bipartisan legislation passed by a vote of 309 to 118 and now moves to the U.S. Senate for consideration.

The FY17 Omnibus funds the nation's priorities, including: defense and national security operations, economic development, the fight against substance abuse and illegal drug trafficking, health care benefits for retired coal miners and their dependents, access to clean water, and our nation's energy security.

The bill enhances border security with $911 million and boosts support for our men and women in the U.S. Armed Forces with more than $25 billion more than last year. The additional defense funding:

The bill also supports critical funding for programs that provide important services for the people of southern and eastern Kentucky, including:

Congressman Rogers gave the following remarks on the floor of the U.S. House of Representatives urging his colleagues to support the bill:

"Mr. Speaker, I am pleased to support this legislation and commend Chairman Frelinghuysen and Mrs. Lowey for a job well done.

"Mr. Speaker, the most important point that I can make for many in this chamber, is that if you reject this omnibus spending bill, the alternative is a continuing resolution for the balance of the year, which will put into effect the spending priorities of the previous administration. The Obama plan will still be in effect if you reject this Omnibus bill.

"This comprehensive bill responsibly funds key government programs through the rest of the fiscal year.  As the battle against ISIS continues, funding for both defense and diplomacy must be a part of our national security framework.  Along with strategic increases for the DoD, the Omnibus includes critical funding for the Department of State and Foreign Operations.

"Protecting our diplomats abroad is a top priority, and the bill provides $6.1 billion.  The legislation also upholds our commitments to key international allies, like Israel and Jordan, and establishes a new $100 million fund to support nations facing Russian aggression.

"We continue funding for global health, humanitarian aid, and famine relief, including a new rapid respond fund for emerging infectious diseases. And the bill dedicates significant resources to stop drug trafficking along our southern border with robust counter-narcotic and law enforcement efforts in Mexico, Central America and Colombia.

"No funds are provided for either the Green Climate Fund or the UN Panel on Climate Change; and funding for the UN is reduced by $640 million.

"While national security is a key tenet of this legislation, the Omnibus also promotes economic growth at home – particularly in my Kentucky district.  Coal country came under siege under President Obama, with an onslaught of job-killing regulations.  Our communities are working hard to recover after losing nearly 12,000 mining jobs.

"In addition to rolling back several anti-coal regulations, this bill permanently provides health care benefits to retired coal miners and their families. This gives the people who have powered our nation for generations the peace of mind they deserve.

"The bill also provides Kentucky with $25 million to continue the Abandoned Mine Lands (AML) Pilot Program, which creates jobs by reclaiming abandoned mine land sites for economic development.  The Appalachian Regional Commission receives historic funding: with the $152 million appropriated, $10 million is dedicated to high-speed broadband deployment in our region. EDA is also provided with $30 million to revitalize the coalfields.

"In addition to creating jobs, this bill builds on our progress to combat drug abuse. Like Operation UNITE in my district, we take a holistic approach to fund a comprehensive federal response. An increase of $781 million is provided for fighting the opioid epidemic—including treatment, prevention, and law enforcement.  This bill will save lives. 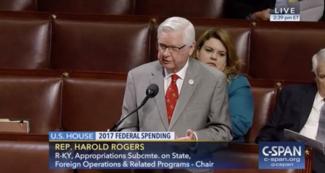