"Laurel County's industrial buildings are filled to capacity and expanding, so you've clearly been planning your work and working your plan," said Rogers. "The future is brighter than it's ever been before all across southern and eastern Kentucky."

Rogers appluaded completion of the new frontage road alongside I-75 between exits 41 and 38 for which he and former State Senator Tom Jensen helped secure funding a decade ago.

Rogers was also the keynote speaker for the Cumberland Valley Area Development District's monthly meeting in London. During the meeting, he discussed new grant funding now available for local governments to reclaim and repurpose abandoned mine lands (AML) for economic development projects.

"Kentucky has $25 million available for the 2017 AML Pilot Program in southern and eastern Kentucky to spur job creation, boost tourism and help revitalize our region," said Rogers who first championed the new program in Congress in 2016. "So far, the program has funded nine projects in nine counties in our region, providing much-needed assistance in our communities suffering most from the Obama-era war on coal."

"We have the best workforce in the country and I believe we could do more work for the federal governemnt right here in southern and eastern Kentucky. When businesses have an ISO certification, they can compete for new opportunities and create more jobs here at home," said Rogers.

On October 19, 2017 at the Corbin Center, SKED will host a Supplier Education and Economic Development (SEED) Contracting Symposium to help businesses learn more about federal contracting requirements and opportunities. For more information, contact SKED at 606-677-6100. 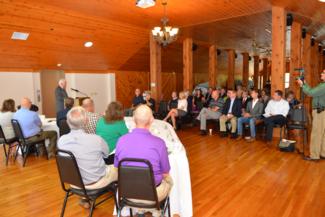 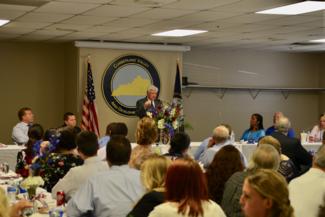 Rogers speaks to Cumberland Valley Area Development District
Rogers has served Kentucky’s 5th Congressional District since 1981. With a focus on economic development, job creation, fighting illegal drugs and preserving Appalachia’s natural treasures, he has a reputation for listening to his constituents and fighting for the region he represents. For more information, visit Congressman Rogers' online office at http://halrogers.house.gov or follow him on Twitter or Instagram @RepHalRogers, and on Facebook.