ATLANTA, GA – A bipartisan panel of U.S. Senators and House members joined a Congressional Forum this morning at the 2018 National Rx Drug Abuse and Heroin Summit in Atlanta, Georgia to discuss ongoing federal efforts to combat the nation’s public health emergency on opioids, as well as their vision for future life-saving efforts.

In 2016 alone, over 42,000 Americans died after overdosing on opioids, a 28 percent increase from 2015. Moreover, for each of these tragically fatal overdoses, there were over 30 nonfatal overdoses.

“Though our districts are very different, the human toll taken by the opioid epidemic is just the same,” said Rep. Hal Rogers (R-Ky.), co-founding co-chair of the Congressional Caucus on Prescription Drug Abuse and Chairman Emeritus of the House Appropriations Committee. “Every member sees the critical and urgent need to make these targeted investments in our nation’s future. Despite the oftentimes heated political rhetoric in today’s age, Congress has come together, cast partisanship aside, and worked to find solutions to the opioid crisis.”

Congressman Rogers and Congresswoman Katherine Clark introduced the bipartisan Substance Use Disorder Workforce Loan Repayment Act to incentivize medical professionals to enter the addiction treatment profession by offering them up to $250,000 in student loan repayment.

“In my district, I’ve heard repeatedly that there just simply aren’t enough treatment specialists available to help with the growing number of Americans struggling with substance abuse disorder,” said Rep. Clark (D-Mass.). “The lack of workforce available in this field is an urgent national problem.”

The rate of drug overdose deaths involving synthetic opioids (other than methadone), such as fentanyl, increased by 88 percent from 2013 to 2016. From 2015 to 2016, the rate doubled.

“The economic incentives to move to fentanyl are overwhelming. If you are in a drug gang and spend $6,000 on heroin, you can sell it for $80,000 on the streets of the United States. If you spend the same $6,000 on fentanyl, you can sell it for $1.6 million on the streets of America,” said Sen. Edward Markey (D–Mass.). “The INTERDICT Act, signed into law earlier this year by President Trump, equips our border control agents with advanced technological tools and resources that help stop the flow of fentanyl across our borders.”

Several Members mentioned the National Center of Health Statistics’ recent report of decreased longevity in America being largely attributed to the opioid epidemic. The average life expectancy declined from 78.7 in 2015 to 78.6 in 2016.

“Stigma has allowed addiction to go untreated for years. For too long our policies reflected a belief that addiction was a character defect,” said Sen. Maggie Hassan (D-NH). “When we stigmatize we lose; we lose people; we lose untapped talent; we lose opportunity and possibility. Over time we see and feel the ripple effects of such loss, as we are feeling now with this crisis in our prisons, our schools, our neighborhoods and our economy.”

The federal delegation shared details about bills that they have introduced to address the epidemic through a holistic effort incorporating law enforcement, treatment, prevention and research.

“H.R. 4275, the Empowering Pharmacists in the Fight Against Opioid Abuse Act, will help pharmacists and give them the tools and the materials that they need to identify fraudulent prescriptions and forged prescriptions so we can educate them about what to look for,” said Rep. Buddy Carter (R-Ga.), the only pharmacist in Congress.

“At the federal level we have made a beginning, but this war will not be won from Washington. It will be won on the streets of our cities in rural America, and in our classrooms, our churches, and in neighborhood clinics who take away the stigma and increase the understanding,” said Rep. William Lacy Clay (D-Mo.).

To watch the Congressional Forum and learn more about the National Rx Drug Abuse and Heroin Summit, visit facebook.com/rxsummit.com. 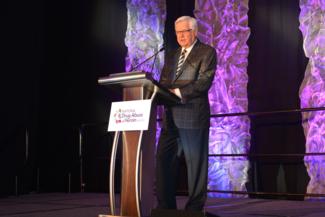