LONDON, Ky. -- A new 500,000 gallon elevated water tank will soon be built in Laurel County thanks to a $1.3 million grant awarded by the U.S. Army Corps of Engineers. U.S. Rep. Harold "Hal" Rogers (KY-05) announced the grant award during a ground breaking ceremony at Laurel County's new Greer Industrial Park. The water tower will support future businesses at the industrial park, as well as approximately 375 current businesses in the community, and more than 5,600 homes in the area.

"When prospective businesses are looking for a place to create jobs, we must have the land, water and other utilities available to demonstrate that we are ready and able to support their work," said Congressman Rogers. "I want to applaud Laurel County Judge Executive David Westerfield, London Mayor Troy Rudder and Paula Thompson, executive director of the local industrial authority, for having the foresight to advocate for this new water tower and prepare for future growth."

In addition to funding for the water tower, Sandy Dunahoo, Commissioner for the Kentucky Department of Local Government announced the park will become one of Kentucky's Build Ready Sites for prospective businesses.

The project was previously awarded funding for waterlines from the U.S. Department of Agriculture - Rural Development (USDA-RD) in Kentucky.

"Without this infrastructure in place, we would not be able to give our young people the jobs and training they need to be able to stay here in our region to work and give back to their communities," said Hilda Legg, Kentucky Director of USDA-RD. "For every dollar we invest, four more dollars are generated in the community. We want to help you be innovative and grow this local economy even more."

"Over the last two weeks, I’ve been all across our region, and I’ve had the privilege to announce nearly $10 million in federal funding for infrastructure projects and economic development at industrial sites for your neighbors in the East – including Harlan, Perry, and Carter Counties," said Rogers. "It’s important that we survey the entire region when we’re working to recruit new business and industry. We are not competing with one another – our true competition is outside of Kentucky."

Construction of the new water tower is expected to begin in Spring 2019.

Rogers has served Kentucky’s 5th Congressional District since 1981. With a focus on economic development, job creation, fighting illegal drugs and preserving Appalachia’s natural treasures, he has a reputation for listening to his constituents and fighting for the region he represents. For more information, visit http://halrogers.house.gov/ or follow Rogers on Twitter, Instagram or Facebook. 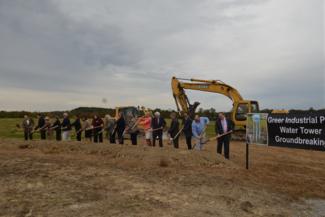