WASHINGTON, DC -- U.S. Rep. Harold "Hal" Rogers called for compromise during debate on legislation to fund the federal government for the remainder of Fiscal Year 2019. He opposed a package of six federal funding bills today, H.R. 648, that fail to provide critical funding for border security. Rogers helped construct the package of funding bills last year as Chairman Emeritus of the House Appropriations Committee; however, he says there is now a "glaring missing piece."

"While this legislation addresses many bipartisan concerns, I fear that it has no chance of becoming law in its current form without a compromise on border security. That is truly unfortunate. We are holding up the government; we are causing a lot of people a lot of unnecessary pain and suffering - and we need to get this done," said Rep. Rogers, who serves as Ranking Member of the House Appropriations Subcommittee on State and Foreign Operations. "It is as if we worked together to carefully piece together a complex puzzle and there, right in the middle, is a glaring missing piece. These six bills that we have worked through together are good bills, but we need to find that missing piece and reach a compromise that will fund border security, reopen the government, pay our faithful employees who are now struggling to make ends meet, and get back to the business of serving the American people."

On Saturday, President Trump offered a compromise to end the partial government shutdown that was immediately rejected by Democratic congressional leaders even before his public announcement of the deal. 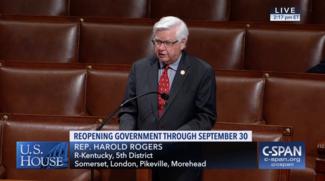