Chairman Rogers spoke in support of the bill during a committee hearing this morning:

"I’d like welcome everyone to today’s markup of the fiscal year 2019 appropriations bill for the Department of State, Foreign Operations, and Related Programs.

"I want to thank Chairman Frelinghuysen for another year of his tireless work and commitment to move bills through the Committee. The completion of our mark up today will mean 10 of the 12 fiscal year 2019 bills will be through subcommittee, so I congratulate the Chairman. I also want to thank him for his support of the diplomacy and development mission sustained in the bill. The allocation for fiscal year 2019 allows the subcommittee to responsibly provide the resources to support United States foreign policy and security interests around the globe.

"I also want to thank Mrs. Lowey for her work on this subcommittee. She cares deeply about the programs funded in this bill and, despite our differences on some issues, we have many common priorities that advance our country’s national security and economic interests. It has been a true pleasure to continue the strong partnership we fostered during my tenure as full committee chair through our work in this setting, and I thank her for her friendship

"I would also be remiss if I neglected to note that, as a whole, our subcommittee has a great group of members. Our hearings and meetings are well-attended and I appreciate the interest and knowledge from members, on both sides of the aisle, on the programs that fall under our jurisdiction. So, I thank each of you for your contributions.

"Before summarizing the recommendation before you, I want to welcome our newest Member, Mr. Rutherford of Florida. I have been proud to work with Mr. Rutherford on the STOP School Violence Act, which we passed into law earlier this year, so I know he is an engaged, thoughtful and hard-working member. We are glad to have you on the Subcommittee and look forward to working with you as the process moves forward.

"Certainly, the importance of diplomacy in world affairs has come to the forefront this week as President Trump has undertaken historic efforts in Singapore to build a lasting peace in the Korean Peninsula. We are all hopeful that the President’s conversations with the North Korean leadership will bear fruit and lead to both prosperity for the people of that region and security for the US and her allies.

"The FY19 State and Foreign Operations Appropriations bill before us today totals $54 billion. This is the same as the fiscal year 2018 enacted level and $11.8 billion above the President’s request.

"The legislation supports the continued investment in our diplomatic and development capacity across the globe, which are core components of our nation’s security framework. Together with our unmatched Armed Forces, the dedicated public servants at the State Department and USAID help the United States lead by example and build a foundation for peace and security in every corner of the world.

"It does so by first, providing over $6 billion for embassy security. This funding will allow the State Department to address the security needs of personnel serving at more than 275 U.S. diplomatic facilities overseas and is in line with the recommendations of the Benghazi Accountability Review Board.

"Second, the bill recommends $9.3 billion for security assistance, including $3.3 billion of Foreign Military Financing for Israel, which is an increase of $200 million over last year.

"Additionally, the bill maintains support for key partners, such as:

"Third, the bill upholds American values. The bill increases funds to $2.4 billion funding to promote democracy around the world. It includes $7.6 billion for humanitarian assistance, and $8.7 billion for Global Health Programs, including $845 million for maternal and child health programs.

"Fourth, the bill supports the President’s Initiative to Stop Opioid Abuse and Reduce Drug Supply and Demand by increasing assistance to countries in our Hemisphere to stop the flow of opioids into the United States, and it fully funds the President’s request to combat transnational criminal organizations. As you all have heard me discuss for years, the opioid epidemic is perhaps the leading domestic crisis of our time, called by the CDC, an epidemic and by the President, a disaster. As our challenge has shifted from prescription painkillers to illicit synthetic opioids, we must engage with our partners on the international stage to stop the flow of heroin and fentanyl through our borders and into our communities. This is a life or death situation, there's no doubt about that, and I am proud that this bill takes important steps to stem the tide of addiction and overdose deaths. We're beginning to see now for the first time, an actual reduction in the prescription pain abuse deaths and while we are seeing that shift from legitimate prescription pills, we're now seeing illicit, illegal heroin taking the place of those pills. The big problem is the heroin is being laced with fentanyl, which is an absolutely incredible killer and the user, who is using heroin laced with fentanyl, has no idea how much fentanyl is in the mix, and is many times fatal - unknown to the user. It's a whole new problem that we're facing now with the fight against this scourge.

"Fifth, the bill prioritizes funding for 'global health security', which enables developing countries to be better prepared to prevent, detect, and respond to dangerous infectious disease outbreaks that could have a direct impact on the health of Americans.

"And lastly, the bill focuses on making our government more accountable to Congress and the American people by strengthening oversight, improving management, and eliminating redundant programs.

"Before turning to Mrs. Lowey, I want to express my appreciation for the work of the staff.

"From the majority staff, I want to thank the clerk, Craig Higgins, and his team Susan Adams, Clelia Alvarado, David Bortnick, Winnie Chang, and Dean Koulouris. From my personal office, I also want to thank Megan Bell and Alex Pinson.

"We appreciate all of your help."

The bill now moves on to the full House Appropriations Committee for consideration. 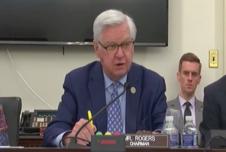