WASHINGTON, DC -- Today, President Donald Trump signed into law the Consolidated Appropriations Act of 2019, which was approved by Congress on Thursday to boost border security and fund government operations through the remainder of the fiscal year. The bipartisan funding package includes seven appropriations bills which support critical programs across Southern and Eastern Kentucky, including rural infrastructure, the coal industry, improvements for school safety, protecting the sanctity of life and combating the drug abuse epidemic.

"We've made great strides in recent years in the battle against drug abuse, and this legislation ensures hope for life-saving measures will continue in communities across the country. This funding is comprehensive in scope, addressing needs for prevention in our schools, increasing treatment and recovery opportunities in rural areas, and empowering law enforcement with the tools they need to hold drug dealers accountable," said Congressman Rogers, co-founding co-chair of the Congressional Caucus on Prescription Drug Abuse. "While this federal funding package addresses many of our nation's needs, I want to specifically applaud the bipartisan effort of this Congress to prevent, treat and enforce drug abuse issues that are plaguing thousands of families every single day. Together, we are saving lives and preventing abuse."

The new law includes the following measures to fight the drug abuse epidemic in Kentucky:

Support for Combatting the Drug Epidemic

Treatment and Reentry – the bill includes $77 million for drug courts at the Department of Justice to support non-violent offenders in their recovery. An additional $22 million is included for Veterans Treatment Courts to help our men and women in uniform who are struggling with addiction. Both of these accounts are funded at $2 million more than the FY18 enacted level. Offender reentry and research activities under the Second Chance Act are also funded at $87.5 million.

International Drug Interdiction – the bill supports President Trump’s “Initiative to Stop Opioid Abuse and Reduce Drug Supply and Demand” by increasing funding to help Mexico secure its borders and combat poppy cultivation and heroin, and synthetic drug production; increasing funding to support precursor chemical control; and increasing funding for global demand reduction programs. The bill also directs the Secretary of State to develop an international diplomatic and assistance strategy to stop the flow of opioids into the United States. 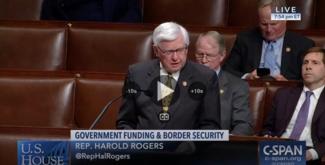 VIDEO: Congressman Rogers speaks in support of the Consolidated Appropriations Act of 2019