"President Trump rightfully highlighted the successful transition that he has led from a stagnant economy to a thriving American recovery boasting 2.4 million new jobs, ending the war on coal and passing historic tax reform that is already increasing paychecks and benefits for hard-working Americans. I was pleased to hear the President’s commitment to make critical infrastructure improvements, boosting national security and our military strength, and paving the way for immigration reform. I applaud the President for honoring American heroes and inspiring our nation with a message of hope." 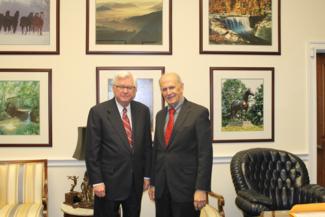 Rogers' guest for the SOTU was JC Egnew, a long-time business leader and job creator in McCreary Co.

Rogers has served Kentucky’s 5th Congressional District since 1981. With a focus on economic development, job creation, fighting illegal drugs and preserving Appalachia’s natural treasures, he has a reputation for listening to his constituents and fighting for the region he represents. For more information, visit Congressman Rogers' online office at http://halrogers.house.gov  or follow him on  Twitter  or  Instagram  @RepHalRogers, and on Facebook .