WASHINGTON, DC -- On behalf of unborn and newborn babies at risk of being terminated, U.S. Rep. Hal Rogers (KY-05) lent his voice on the House floor to speak out against late-term abortion and to rally support to better protect abortion survivors. Today, Rogers announced his support of three vital pieces of legislation to protect the most innocent among us, including the Born-Alive Abortion Survivors Protection Act, H.R. 962, the Pain-Capable Unborn Child Protect Act, H.R. 784 and the Sanctity of Human Life Act, H.R. 305. The Born-Alive Abortion Survivors Protection Act would require that an infant who survives an attempted abortion receive appropriate treatment and be transferred to a hospital, and Congressman Rogers spoke against any attempt to end their lives.

"I rise today to speak for those who cannot speak for themselves, the souls of our nation’s unborn and newborn children. I have long championed pro-life legislation and initiatives, but recent events have shaken me and millions across our nation – compelling me to address this body," said Congressman Rogers. "The act of abortion is tragic and heartbreaking. However, the termination of human life for abortion survivors is something worse – criminal and subhuman. But proposals exist in our state governments that would allow just that. Allowing an infant to die, or intentionally killing an abortion survivor, is a disgrace and must not be allowed to happen in any circumstance. I echo the calls from Republican Leadership to immediately pass the Born-Alive Abortion Survivors Protection Act, to ensure the sanctity of life remains a fundamental principle in America."

House Republicans have requested unanimous consent to consider H.R. 962 every day, but House Democrats have rejected the life-saving measure each time. Republican leaders have vowed to file a petition to force a vote after 30 days.

President Trump also called upon this Congress to pass the Pain-Capable Unborn Child Protect Act, during his State of the Union address last week. 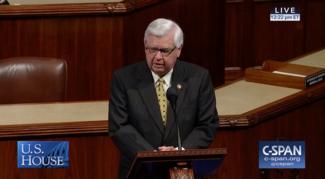