The bill establishes criminal penalties for any person who performs or attempts an abortion after 20 weeks, with exceptions for saving the life of the mother, and in cases involving rape or incest.

"It is our moral duty to protect our innocent unborn children from violent late-term abortions, when medical professionals confirm the fetus responds to pain after 20 weeks," said Congressman Rogers, a long-time member of the Congressional Pro-Life Caucus. "I was proud to cosponsor this legislation, protecting both the life of our unborn children and their mothers."

The bill, also known as Micah's Law, was named for Micah Pickering who was born at the same stage and survived after spending four weeks in intensive care.

Medical professionals report anesthesia is used in surgeries for 20-week-old patients still in utero. Meanwhile, it is still permissible in the United States to perform abortions at the same stage of development in the sixth month of pregnancy and beyond.

The United States is currently one of only seven countries in the world that allow elective abortions after 20 weeks of pregnancy.

The bill now heads to the U.S. Senate for consideration. 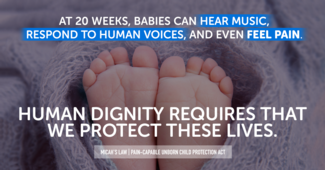