PIKEVILLE, Ky. -- During the 2022 SOAR Summit, approximately 80 first responders were honored for their heroic response during the Eastern Kentucky flood in July. A tribute video boomed across the Appalachian Wireless Arena as dozens of men and women from the Kentucky National Guard, Kentucky State Police, and local search and rescue teams filled the center stage, followed by a moment of silence for flood victims.

At least 43 Eastern Kentuckians lost their lives in the flood or during flood relief efforts, with one woman still missing in Breathitt County.

"We are in the presence of some of the greatest heroes in Kentucky history. The selfless and courageous actions of the people on this stage are what modern day saints are made of," said Congressman Hal Rogers, Dean of the U.S. House of Representatives and a co-founder of SOAR. "Had it not been for the first responders who bravely risked their own lives, the death toll in Eastern Kentucky would have been much higher."

More than 1,400 people were saved by air or water rescues during the flood, according to the Kentucky Emergency Management Office.

Congressman Rogers highlighted the exemplary actions of two Kentucky National Guard Flight Medics who were heralded by their peers and various agencies for their extraordinary life-saving actions.

Congressman Rogers presented the two Guardsmen with a tribute in the Congressional Record.

"The skilled and courageous acts of the two MEDEVAC crews are worthy of the highest honor," said Congressman Rogers. "I presented them with a copy of a tribute that I entered into the Congressional Record to ensure their stories of valor are preseved among the greatest heroes of our time."

Attendees of the SOAR Summit gave Hunter, Lowe and all of the first responders an extended standing ovation. 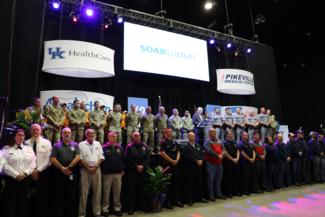 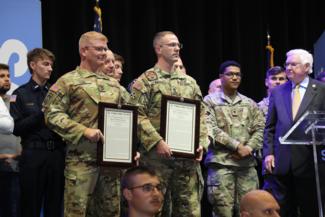