WASHINGTON, DC -- As Chairman of the House Appropriations Subcommittee on State and Foreign Operations, U.S. Rep. Hal Rogers (KY-05) presided over a budget hearing for the U.S. Department of State with Secretary Rex Tillerson to review ongoing foreign policy and national security operations and the proposed budget for fiscal year 2018.

Chairman Rogers applauded Sec. Tillerson for proposing to continue funding to support agreements with Israel, prioritizing a strategy to defeat ISIS, and supporting programs to counter Russian agression. However, he shared concerns about reengaging with Russia, protecting U.S. personnel overseas, proposed sweeping cuts to foreign aid, and efforts to end illicit cocaine imports from Columbia to the United States.

Chairman Rogers made the following remarks during his opening statement:

"Good afternoon.  The hearing will come to order.

"Secretary Tillerson, thank you for being here today to discuss the State Department’s fiscal year 2018 budget request, and thank you for your service to our country.  I would like to thank Chairman Frelinghuysen for joining us as well– I know these issues are very important to him.

"I would also like to recognize our Ranking Member, Mrs. Lowey. I am pleased we are able to continue working together as chair and ranking of the State Foreign Operations Subcommittee.  I want the Secretary to know this Subcommittee has history of bipartisanship and I hope that will continue as we move through the appropriations process for this fiscal year.

"Mr. Secretary, these are challenging times, to say the least, for our country’s foreign policy and national security.  There are crises at seemingly every corner of the globe.  As the nation’s top diplomat, I know you are most keenly aware of this.  From long-standing challenges such as achieving Middle East peace, ensuring stability in Afghanistan and Pakistan, to maintaining cooperation among our Gulf partners, denuclearizing the Korean peninsula, tackling drugs, crime, and corruption in our own hemisphere, and the critically important task of leading a global coalition to defeat ISIS, you have your work cut out for you.

"The President’s budget request for the Department of State and foreign operations for fiscal year 2018 is $40.09 billion, which includes $28.08 billion in base funding and $12.01 billion in Overseas Contingency Operations, or OCO funding.  In total, that’s a cut of 24% from the level included in the fiscal year 2017 Omnibus, under which we now operate.

"While I support the President’s efforts to beef up our military through the defense budget, the sweeping cuts proposed to the State Department and our international assistance programs are deeply concerning.  Many of us share the views articulated so well by Admiral Mullen and General Jones in their recent op-ed entitled “Why foreign aid is critical to the U.S. national security”.

"I appreciate that this budget request fully funds the Memorandum of Understanding with Israel. It is imperative that during such dangerous times in the Middle East, Israel be able to maintain its qualitative military edge.  The budget also prioritizes programs that support the campaign to defeat ISIS, but the proposed cuts to security and economic assistance for many of our partners in this fight sends at best a mixed message about our commitment to them and to the fight.  I hope you can reassure us today by addressing how the Foreign Military Financing Program and Economic Support and Development Fund requests will meet the needs of partner countries engaged in defeating ISIS.

"Although the funding levels are reduced, I am pleased the request continues to focus on programs that counter Russian aggression.  I understand from your statements last week that the President asked you to begin a reengagement process with Russia.  I would like you to tell the Subcommittee what that entails because from where I sit, their actions on so-called “areas of mutual interest” continue to be problematic.  A good example is North Korea -- one of the greatest global threats today. Recent reports indicate Russia has stepped up their economic engagement with North Korea intending to diminish the impact of China’s economic sanctions.  I don’t have enough time today to go through the list, but with almost every top U.S. security priority, you will find Russia working against our interests in some manner, not to mention the arrests taking place this week in the streets of Moscow.
"I’ve noted many of the ongoing global crises that require diplomatic efforts, but they also underscore the tremendous need for continued investments in humanitarian assistance, democracy promotion, and support for global health and development programs.  This budget proposal makes significant cuts in these areas that I believe are contrary to our country’s long history of leading the world in helping the most vulnerable during times of crises, conflict, and unrest.

"Mr. Secretary, I hope you can reassure us that keeping U.S. personnel safe while serving abroad is at the top of your priorities.  The recent attack in Kabul is a reminder that we must remain ever vigilant in the defense of U.S. personnel and facilities overseas.  It will certainly be my first objective as we review your request and move through the appropriations process.  I hope you will address how such a challenging task will be achieved with substantially fewer resources.

"Before I close, I want you to know that I take my role in providing oversight of your Department and the many foreign assistance programs very seriously.  My first hearing as Chair of this Subcommittee was with the Inspectors General of State and USAID to identify the most significant management challenges.  I’m sure I don’t need to tell you, there are many and they are indeed significant.  I intend to address this issue further in my questions, but I believe there needs to be a position at the highest levels that can focus on the business of managing the operations and assistance of the Department of State.

"As you and I have talked briefly, from very early on, about a need for a deputy secretary for management, freeing you and the policy-makers of the necessary time of the paper work of running the Department.

"Mr. Secretary, I look forward to working with you to identify your most pressing needs and to support you in your efforts to maximize efficiencies and find other cost saving measures.  The taxpayers deserve this level of scrutiny and review that you have underway.  However, it is the Congress that has the Constitutional duty to fund the federal government and this Subcommittee will uphold this responsibility by carefully considering the impact of the President’s proposed funding and personnel reductions to the State Department and foreign assistance programs.

"You have your work cut out for you and we want to be there to help in the chores that are important to all of us." 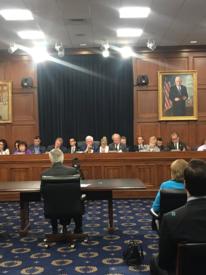