“In the immediate wake of last month’s tragedy in Parkland, more than 15 students were arrested in my home district of Eastern Kentucky. Thankfully our students and local law enforcement acted swiftly to prevent a copycat event in our own schools,” said Rep. Rogers. “As our nation battles this epidemic of school violence, it is imperative we utilize our available resources to stop tragic events before they occur. But, unfortunately, too many students and officials don’t have the tools they need to successfully act upon similar situations. Thanks to this bipartisan bill and the tireless advocacy of Sandy Hook Promise, hopefully we can turn that tide.”

“I’m deeply grateful to Sandy Hook Promise for their tireless support for this legislation," said Rep. Deutch. "When we first introduced this bill, I had no idea it would hit so close to home for me and my community. This vote is proof that Congress can take bipartisan action to keep our children safe. However, my colleagues should not be mistaken to think this is enough. We cannot tackle the rampant gun violence in our country without addressing guns themselves. Let’s move with this bipartisan momentum and pass meaningful legislation to make our communities safe.”

“Today’s vote in the House marks an important step toward keeping our children and our schools safe," Rep. Rutherford said. "As a career law enforcement officer in Jacksonville, I know that security requires a multi-layered approach. The STOP School Violence Act will give schools and communities the resources they need to identify threats and prevent acts of violence before they occur so we can avoid tragedies like what transpired at Marjory Stoneman Douglas High School a month ago today. I commend Rep. Deutch, along with our colleagues on both sides of the aisle, for working with us to make schools more secure, and I look forward to seeing the Senate join us in the effort to protect our kids.”

"When we drop our kids at school, we want them to be excited about the day ahead — not fearful for their safety. Passing the STOP School Violence Act is the first of what I hope will be many steps towards making schools safer and preventing gun violence. Today’s vote will give teachers, students and law enforcement more support from Congress,” Rep. Kilmer said. “But the problem of gun violence needs to be addressed directly. The leaders of Congress need to listen to the students and teachers who are united today in calling for more action on this issue and better policies that make it harder to use a gun to commit violence.”

The STOP School Violence Act would boost school efforts to develop violence prevention programs and coordinate with law enforcement to improve school safety. It would create a grant program to train students, teachers, school officials, and local law enforcement how to identify and intervene early when signs of violence arise and create a coordinated reporting system when threatening signs are noticed.

The legislation was introduced on January 30, 2018, two weeks before the tragic mass shooting at Stoneman Douglas High School in Parkland, Florida. It passed by a vote of 407-10 and now moves to the U.S. Senate for consideration. 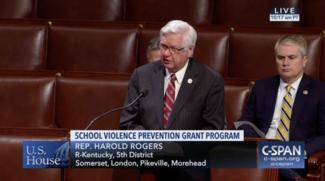 During a speech on the House Floor, Congressman Rogers urged his colleagues to pass the
STOP School Violence Act
Click the photo to watch the full speech