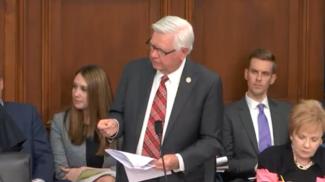 U.S. Rep. Hal Rogers (KY-05) advocated for provisions to fund the Appalachian Regional Commission (ARC), coal research and development through the National Energy Technology Labs, and to prevent USACE from carrying out a water-supply reallocation study at Lake Cumberland in Kentucky.

"This bill responsibly funds our national security interests and builds upon essential infrasture needs across the country. Specifically, this bill protects the ARC from proposed elimination and ensures critical programs will continue in our hardest hit Appalachian coal communities," said Congressman Rogers, Chairman Emeritus of the House Appropriations Committee. "The bill also prohibits the Corps of Engineers from carrying out its ongoing effort to tax small rural communities that access water in Lake Cumberland in southern Kentucky. I urge my colleagues in the U.S. House of Representatives to support this legislation."

The bill totals $37.56 billion – $209 million below the fiscal year 2017 enacted level and $3.65 billion above the President’s budget request. Funding is targeted toward national security efforts – including nuclear weapons activities – and energy and water infrastructure investments.

“National security is our number-one priority, and this bill will fund essential programs that maintain our nuclear deterrence posture in the face of growing global threats – including North Korea and other countries that are testing the tolerance of the international community,” House Appropriations Committee Chairman Rodney Frelinghuysen said. “Further, this legislation will make important investments in our energy development and water infrastructure to keep our economy growing and to continue the country’s lead in essential energy technology and innovation."

The bill provides strong national security investments, including increases above fiscal year 2017 for nuclear weapons programs. The bill also protects funding for critical national and regional waterways – which handle commerce valued at more than $2 trillion annually – through the USACE, and programs that encourage energy independence and economic competitiveness.

Nuclear Security – To address our national security needs and meet emerging threats from around the globe, the bill provides a total of $13.9 billion for DOE’s nuclear weapons security programs, including Weapons Activities, Defense Nuclear Nonproliferation, and Naval Reactors – a $976 million increase above the fiscal year 2017 level. This funding will uphold the nation’s nuclear deterrence posture, maintain the safety and readiness of our weapons stockpile, and allow the U.S. to meet any nuclear threat. This includes:

• $1.83 billion for Defense Nuclear Nonproliferation – $76.5 million below the fiscal year 2017 enacted level. This includes $340 million in funding to help fulfill the international commitment by the U.S. to construct the Mixed Oxide (MOX) Fuel Fabrication Facility to dispose of surplus plutonium.

Army Corps of Engineers – The Army Corps of Engineers is funded at $6.16 billion, an increase of $120 million above the fiscal year 2017 enacted level and $1.16 billion above the President’s budget request. The bill focuses funding on activities that will have an immediate impact on public safety, job creation, and economic growth, including those that help increase the functionality of our ports and waterways. For example, the bill provides:

• $2.8 billion for navigation projects and studies, including $1.34 billion in funding from the Harbor Maintenance Trust Fund and full use of estimated annual revenues from the Inland Waterways Trust Fund, to help advance American competitiveness and export ability; and

• $1.8 billion to support public health and safety by funding flood and storm damage reduction activities, an increase of $74 million above fiscal year 2017 and $424 million above the budget request.

Energy Programs – Funding for energy programs within DOE is $9.6 billion – a decrease of $1.7 billion below the fiscal year 2017 enacted level and $2.3 billion above the President's request. Within this total, the bill prioritizes early-stage research and development funding for the applied energy programs. Funding within the accounts is targeted to encourage U.S. economic competitiveness and help advance the nation’s goal of an “all-of-the-above” solution to energy independence.

Research and development to advance coal, natural gas, oil, and other fossil energy technologies, which will help the country make greater use of our rich natural energy resources and help keep down energy costs, are funded at $635 million – a decrease of $33 million below the fiscal year 2017 enacted level and $355 million above the budget request.

In addition, to promote innovation and growth in nuclear energy, research, development, and demonstration activities are funded at $969 million – $48 million below the fiscal year 2017 enacted level and $266 million above the request.

Science Research – The bill includes $5.4 billion for science research – the same as the fiscal year 2017 enacted level. This funding supports basic energy research, the development of high-performance computing systems, and research into the next generation of energy sources. These investments lay the groundwork for a more secure energy future, helping to reduce the nation’s dependence on foreign oil and ensuring continued economic growth.

Bureau of Reclamation – The legislation contains $1.24 billion – $79 million below the fiscal year 2017 enacted level and $132 million above the President’s request – for the Department of the Interior and the Bureau of Reclamation to help manage, develop, and protect the water resources of Western states. The bill includes $83 million for the second year of funding for water storage, desalination, and water recycling and reuse projects authorized in the WIIN Act.

For a summary, please visit:
https://appropriations.house.gov/news/documentsingle.aspx?DocumentID=394941

For the text of the draft bill, please visit:
https://appropriations.house.gov/uploadedfiles/bills-115hr-sc-ap-fy2018-energywater-energyandwater.pdf