On Thursday, I had the distinct honor of meeting with President Trump and Vice President Pence about the drug abuse epidemic that continues to take thousands of lives across the country every year. In 2015, more than 52,000 Americans died from a drug overdose, according to the Centers for Disease Control and Prevention (CDC). I applaud the President for issuing an executive order to establish the  Commission on Combatting Drug Addiction and the Opioid Crisis. On April 5th, Nancy Hale, President and CEO of Operation UNITE, will testify on Captiol Hill before the Subcommittee on Labor, Health and Human Services about the importance of funding the fight against the nation's deadly drug abuse epidemic.

Also in April, I will join Operation UNITE at the 6th Annual Rx Drug Abuse and Heroin Summit to talk about successful programs like Chad's Hope with leaders from across the country, including the U.S. Health and Human Services Secretary Tom Price, U.S. Surgeon General Vivek Murthy, Former U.S. Speaker of the House Newt Gingrich and many more. The  Rx Drug Abuse and Heroin Summit will take place April 17-20 in Atlanta, Georgia.  Click here for more information.

Drug addiction is just one of many issues that we have been working on in Washington, D.C. Recently, I sat down with WYMT-TV via satellite to discuss coal mining jobs, healthcare, and working with President Trump and the new Congress. Click the video below to watch our discussion.

We are making great strides this year to drive up coal production and revive our communities in the coalfields through economic development. The Obama Administration's War on Coal is over, but we have a lot of work ahead to restore and diversify our economy. I was incredibly proud to join Senate Majority Leader Mitch McConnell to file the  RECLAIM Act of 2017  in both the U.S. House and Senate. It will expedite access to $1 billion in available funding through the Abandoned Mine Lands (AML) Fund for reclamation and economic development on AML sites in coal-producing states. Kentucky would benefit from more than $100 million over the next five years. I appreciate Sen. McConnell's leadership on this legislation in the Senate and I look forward to working further with him in an effort to get this worthy and vital bill signed into law. On April 5th, I will testify in support of  RECLAIM before the House Natural Resources Committee. For more information about the RECLAIM Act of 2017, visit  halrogers.house.gov. 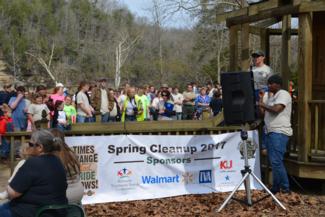 As we welcome warmer weather to the mountains, thousands of PRIDE Spring Cleanup volunteers are combing our hillsides, lakes and streams to remove trash from our beautiful landscape. I want to applaud the nearly 500 volunteers who attended the Cumberland Falls Spring Cleanup on Saturday, March 25, celebrating the 20th Anniversary of PRIDE.  Special thanks to WYMT-TV for covering the event - click here to watch online. To participate in PRIDE Spring Cleanup Month in April, visitkypride.org. Earlier this month, I attended a graduation ceremony at  Chad's Hope in Clay County, where three men successfully completed a faith-based substance abuse treatment program on their journey to sobriety. Chad's Hope has been an incredible resource for those battling the disease of addiction, housing upwards of 60 men every year during the program. Congratualtions to our local graduates!