WASHINGTON, DC -- U.S. Rep. Harold "Hal" Rogers applauds passage of a second federal funding package for fiscal year 2019, including critical funding for Defense and Labor, Health and Human Services, and Education, including clear benefits for Kentucky. It also provides a Continuing Resolution to fund the rest of the federal government's discretionary programs through December 7, 2018.

The legislation provides funding for the 21st Century Cures Act and landmark support to combat the nation's deadly drug abuse crisis, which has been so prevalent in Southern and Eastern Kentucky. It includes the largest pay raise for U.S. troops in nine years and strengthens our defense with modernized equipment, such as new aircraft for our National Guard.

Speaker Ryan selected Rogers to serve on the House-Senate conference committee to finalize the funding package before the end of fiscal year 2018.

"This legislation provides the funding and stability necessary to defend American interests and values around the world – including a well-deserved pay raise for the men and women in uniform who serve bravely under our flag," said Rogers, who spoke on the House Floor urging its passage. "It also provides additional life-saving resources and research for those suffering with cancer, opioid addiction, and other diseases. I am proud of the work of this committee to send these important appropriations bills to the President on time."

The federal funding package totals $852.4 billion and now moves on to the White House for approval.

The FY19 Defense bill continues to rebuild our military, and is fully consistent with the President’s National Defense Strategy and Nuclear Posture Review. It prioritizes readiness, taking care of our service members and their families, and ensuring that the military has the capabilities it needs to fight and win our nation’s wars. This legislation gives the Defense Department the stability and clarity it needs by providing its full appropriation before the end of the fiscal year for the first time in more than twenty years.

Other Community and Economic Development Programs 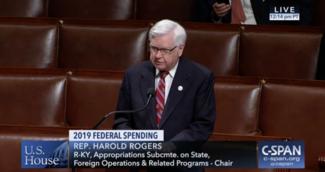 To watch Congressman Rogers' full speech on the House Floor in support of the legislation, click here.