"I applaud President Trump for raising awareness about the nation's opioid abuse epidemic and his commitment to help find and implement holistic solutions," said Rogers, as he welcomed Conway to the stage. "Just last month, he signed into law the 2018 Consolidated Appropriations Act, dedicating over $10 billion to combat the drug abuse epidemic in America."

"The President has called for a reduction in prescribing over the next three years by 30 percent," said Conway. "Here you have the Rx awareness campaign that was done by the CDC and the prescribing protocols that have been put out."

"Also the President has called for the interoperability of our nation's prescription drug monitoring programs (PDMP). As you know 49 of the 50 states have a PDMP - we're working on the 50th and hope they will come forward," said Conway. "We see many organic improvements within the system of the physicians and the pharmacists - a better education that they are undertaking. You'd be suprised to see some of the medical schools did not always have safe prescribing as part of their curriculum, so that's fast changing, which is great."

The White House recently launched the Crisis Next Door initiative with a website for Americans to share their personal stories about addiction and recovery to raise awareness, share solutions and provide hope. Attendees have the opportunity to record their own stories in the Exhibit Hall during the summit, which will be featured online at http://crisisnextdoor.gov.

"At the White House on October 26th, the President went first by sharing the story of his older brother, Fred Junior, succombing to his alcohol addiction at the age of 42. The President talked about his own family's experience and how it impacted him and his life," Conway added.

"I want to thank each and every one of you very much for being on the front lines for many, many years," Conway said in closing. "Consider us a partner, but also a resource and also a people who will listen." 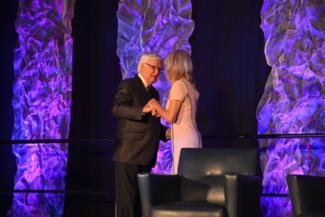 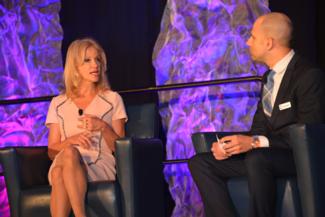 Conway discusses the nation's public health emergency with Doug Edwards, Director of the Institute for the Advancement for Behavioral Healthcare, at the 2018 summit 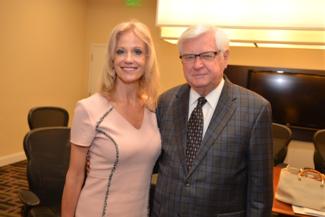