Administrator Lightfoot and Congressman Rogers will address students, local leaders and the general public on September 20 at 12:00 p.m. at the Morehead Conference Center. The event is free and open to the public.

"Kentucky's aerospace industry is leading the nation and Morehead State University is on the forefront of space science education and engineering," said Congressman Rogers. "I invited Administrator Lightfoot to see the success of our students first-hand and to provide his expertise about how we can harness the ingenuity of our students and workforce to attract more opportunities to Eastern Kentucky."

Morehead State University offers one of only five space science programs in the country. The Space Science Center has become renowned for research in nanosatellite technologies. MSU has been involved in the launch of five NASA-funded satellites: CXBN, CXBN-2, Lunar ICEcube, Ky-Sat 2 and the DM-7 Flight Demonstration.

“Morehead State University is pleased to see the Acting administrator of NASA visit our campus," said Dr. Morgan. "Our Space Science program is one of our distinguished programs and we hope to continue to develop partnerships with NASA in the years to come.”

Robert Lightfoot became the acting NASA adminstrator on Jan. 20, 2017. For the last five years, he served as associate administrator, the agency's highest-ranking civil servant. Prior to his work at NASA Headquarters, he was the director of the Marshall Space Flight Center in Huntsville, Ala. Click here to learn more about Administrator Lightfoot. 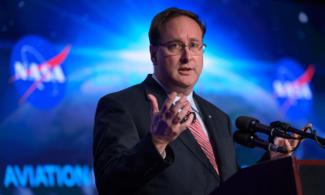