Two grants were awarded to help address the water crisis in Martin County, including:

• The U.S. Army Corps of Engineers is also investing nearly $2 million to improve water service for more than 250 homes.

• $1.37 million from the AML Pilot Program to create the International Landing Zone at the Eastern Kentucky Business Park, which will retrofit a 33,000-square-foot facility to be used by multiple businesses until they are ready to expand into their own locations.

• $2 million from the AML Pilot Program to construct a build-ready site for a 200,000-square-foot building and provide for site preparation at the Eastern Kentucky Business Park.

“Our goal today is to help Martin County take the next steps in the complex process to repair the failing water system once and for all, and this funding will go a long way to make that happen,” said Congressman Rogers, who has secured $105 million in federal funding for Kentucky through the federal Abandoned Mine Lands (AML) Pilot Program since 2016, alongside U.S. Senator Mitch McConnell (R-KY). “In addition to addressing the water crisis, Governor Bevin and I also announced critical funding for site preparation at the Eastern Kentucky Business Park. Together, these grants address infrastructure and job creation where it’s needed the most.”

“I am excited to join Congressman Rogers today in announcing more than $7 million in federal funding to benefit the residents of Martin County,” said Gov. Bevin. “These significant investments through the AML Pilot Program and the U.S. Army Corps of Engineers will expedite critical water system improvements and spur new economic opportunities for Eastern Kentucky families.

“We are grateful to Congressman Rogers, who has been a strong partner in helping us address both the infrastructure and economic development needs of the Martin County community.”

Since last year, Congressman Rogers and Governor Bevin have secured more than $8.5 million in grants to improve the water system in Martin County. In addition to today’s announcements, that figure includes a $1.2 million grant from the Appalachian Regional Commission, and $3.4 million in both AML and AML Pilot grant funding, announced in February of 2018, to install a secondary water line intake in the Tug Fork River, upgrade the Crum Reservoir dam and improve the district’s water treatment plant.

“This shows our consistent and urgent commitment to find a permanent fix to the drinking water issues in Martin County. “We are confident that we are making progress to bring relief to those residents.”

The $2 million Martin County Water District project has to address water issues been approved by the federal Office of Surface Mining Reclamation Enforcement (OSMRE). The others are pending final approval.

The AML Pilot Program, funded through OSMRE, is a program administered by the Energy and Environment Cabinet’s Division of Abandoned Mine Lands with assistance from the Kentucky Cabinet for Economic Development, the Department for Local Government, and the SOAR Initiative in Eastern Kentucky. 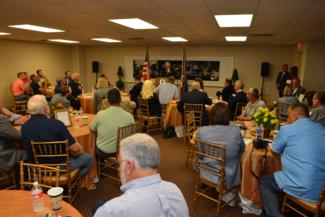