WASHINGTON, DC -- U.S. Rep. Harold "Hal" Rogers, who serves as Ranking Member of the Subcommittee on State and Foreign Operations, shared his concerns for misguided and unprecedented provisions in the subcommittee's fiscal year 2022 appropriations bill. Ranking Member Rogers spoke adamently against allowing taxpayer dollars to be used to repay debts owed by other countries to China, spending $1.6 billion for the Green Climate Fund, and removing a prohibition on federal funds for abortions in other countries.

“Our international strength was largely built on strategic partnerships, compassionate humanitarian aid and iron-clad support for our allied nations, like Israel. While the State and Foreign Operations funding bill maintains many of our critical commitments abroad, it includes far too many extreme partisan measures that jeopardize bipartisan support. My greatest concern is the unprecedented removal of the most important condition to any federal appropriations bill, that no funds can be used to pay for abortion. In this bill, it’s a direct hit to the sanctity of life around the world," said Rogers.

Ranking Member Rogers specifically voted for an amendment to strike $70 million from the bill for the United Nations Population Fund (UNFPA).

"President Biden reversed the prohibition on U.S. funding flowing to UNFPA, despite the fact that the organization has violated the most basic respect for human life through its support of coercive abortion and forced sterilization in China - a severe human rights abuse in its own right," said Rogers.

Rogers applauded $3.3 billion in the bill for Israel, but warned of measures that could prove to be counter-productive for our allied nation.

"The bill weakens a condition carried in prior years regarding the Palestinian Authority and their pursuits of recognition at the United Nations and their campaigns against Israel at the International Criminal Court," Rogers continued. "I believe this change will be counter-productive to resuming direct negotiations between the Palestinians and Israel."

The total bill provides $62.2 billion for the Department of State, Foreign Operations, and Related Programs, a 12% increase over current spending.

“At a time when American families continue to struggle to make ends meet, and foreign aid is under great scrutiny, proposing such egregious and politically motivated misuses of taxpayer funding adds insult to injury,” said Rogers. 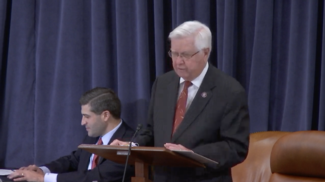