WASHINGTON, DC -- Today, the U.S. House of Representatives passed S. 47, a comprehensive federal lands package, which includes approval for Mill Springs Battlefield to be designated as a National Monument and become part of the National Park System.

Congressman Hal Rogers spoke on the House floor about his efforts for nearly three decades to bring southern Kentucky's historic battefield into the NPS. He also successfully secured federal funds to preserve 900-acres of the battleground and to construct a 10,000-square foot educational visitor center and museum on-site.

"This is a modern-day victory for our treasured Civil War battleground where history was written in our backyard. The battle at Mill Springs was the Union Army's first major victory in the West, securing Kentucky as part of these United States, and it will finally have the national recognition it deserves," said Congressman Rogers, who voted in support of S. 47. "Enactment of this bill is a testament to the persistent efforts of the Mill Springs Battlefield Association (MSBA) and President Bill Neikirk to preserve this hallowed ground that spans Pulaski and Wayne Counties. It has been an honor to work alongside the MSBA and Leader McConnell to bring this longtime dream to fruition."

The MSBA will donate the 900 acres of land and its facilities at Mill Springs to the NPS. The national designation ensures that the Mill Springs Battlefield is protected, preserved and promoted well into the future. 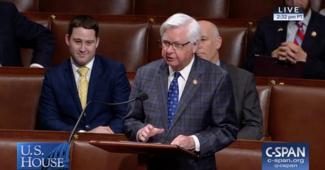