Scott Turpin, president, Aisin World Corp. of America, said Aisin is honored to host the NAM awards ceremony recognizing Rep. Rogers for his many years of dedicated service to manufacturers in Kentucky.

“We’re pleased and fortunate to have such a great friend in Rep. Hal Rogers,”  said Turpin. “Rep. Rogers has dedicated his career to helping improve the lives of his constituents by providing a positive, business-friendly environment so companies like Aisin Automotive Castings can thrive and continue to manufacture quality parts. His support has been overwhelming and has continued even as the business climate changed over the past 20 years.”

Turpin added that Aisin has received tremendous support from Rogers since the decision was made to locate its first North American die casting plant in Southeastern Kentucky.

“Manufacturers need people in Congress that understand the issues facing us today as well as the obstacles ahead,”  said Turpin. Congressman Rogers’ pro-manufacturing voting record demonstrates his commitment to supporting the needs of manufacturers and providing good jobs in Kentucky.”

“We have nearly 244,000 people in Kentucky working in the manufacturing industry, creating products for suppliers around the world and boosting our economy,”  said Congressman Rogers. “I'm honored to work hand-in-hand with industry leaders, like Aisin and NAM, to spur innovation, create local jobs and support quality exports.”

“Manufacturers in Kentucky and across the country are changing lives for the better—through the jobs we create and the products we make. Manufacturing is about improving the human condition, one innovation at a time,”  said NAM President and CEO Jay Timmons. “Rep. Rogers is helping to make our success possible by standing with manufacturers when it matters and casting the right votes.

“Manufacturers employ over 12 million men and women in the U.S., who are making everything from lifesaving medicines to the most cutting edge technology. The strength of manufacturing in America is responsible for the success of America in the world. When manufacturing succeeds, America succeeds, so Rep. Rogers’ consistent support for manufacturing means he is supporting a better future for all Americans.”

Key Votes included in the Voting Record are selected by small, medium and large manufacturing executives who serve on the NAM’s Key Vote Advisory Committee. Additional information on the  NAM Award for Manufacturing Legislative Excellence can be found  here . 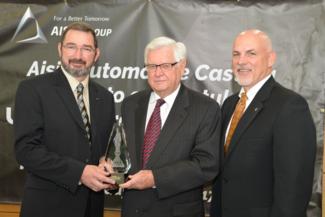 The National Association of Manufacturers (NAM) is the largest manufacturing association in the United States, representing small and large manufacturers in every industrial sector and in all 50 states. Manufacturing employs  more than  12 million men and women, contributes $2 . 17  trillion to the U.S. economy annually, has the largest economic impact of any major sector and accounts for two-thirds of private-sector research and development. The NAM is the powerful voice of the manufacturing community and the leading advocate for a policy agenda that helps manufacturers compete in the global economy and create jobs across the United States. For more information about the Manufacturers or to follow us on Shopfloor, Twitter and Facebook, please visit  www.nam.org .

Aisin Group is the sixth largest, global Tier One supplier of automotive components and systems such as brakes, transmissions, navigation systems, drivetrain, chassis, body, engine-related parts, electronics and intelligent transportation systems, and is the largest transmission manufacturer in the world. A $32 billion company, Aisin Group has 189 consolidated companies and employs more than 100,000 people. In the Americas, Aisin Group companies include 13,500 employees, 35 manufacturing, sales, and R & D centers, including Aisin Technical Center of America located at the North American Headquarters in Northville, Mich., and FT-Techno of America, the company's 950-acre test track and proving ground in Fowlerville, Mich. In London, Kentucky, Aisin Automotive Casting employs more than 700 team members. The plant is located on 41 acres and manufactures and assembles a variety of die cast parts (oil pumps, water pumps, engine and transmission parts, and brake components), for a number of customers including Toyota, General Motors, Nissan, Chrysler, and OTICS.