Rogers specifically highlighted a longstanding request from local residents in Pike County to extend the whitewater rafting season on the Russell Fork River when excess water is discharged from the Flannagan Dam on the Virginia border.

"The whitewater rafting season on the Russell Fork River, which is the discharge river, is great for tourism for a very short span of time. They want to see if there is a way to stretch out the discharge so there are several weeks, even months of whitewater rafting on the river," explained Rogers. "Yet, there is no money requested for the study that's required in the budget request. For years, we've mandated that this study take place."

The proposed study would cost one million dollars with equal cost sharing between the state government and the Corps. Lt. Gen. Todd Semonite suggested a study may not be required, unless an endangered species or another inhibiting factor is found.

"It's a fairly small item in your agenda, but it's big for the people of Pike County who are suffering from the tens of thousands of mine layoffs," said Rogers. "They're looking for a way to make a living and tourism is the best thing we've got going in those mountains and great streams, but we can't get the Corps engaged."

Secretary James and Assistant Secretary Dr. Petty agreed to report back to Congressman Rogers after examining the status of the proposed project. 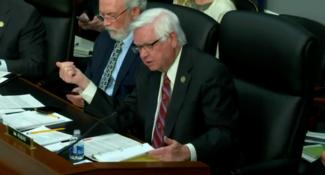 Click the photo to watch the entire hearing. Rep. Rogers' questions begin at 1:35:33.