"Coach Haywood's state football championships and national recognitions are only a reflection of the tenacious work that goes on behind the scenes - in the locker rooms, on the practice field and outside of Belfry High School," said Congressman Rogers. "Coach Haywood is more than a football coach; he is a life coach, driving hope in these mountains now for over four generations of football players and families."

Rogers presented Coach Haywood with a flag that had been flown over the U.S. Capitol in his honor and a framed copy of remarks that Rogers submitted to the Congressional Record to recognize Coach Haywood's accomplishments.

Click here to download a copy of Congressman Rogers' tribute to Coach Haywood in the Congressional Record. 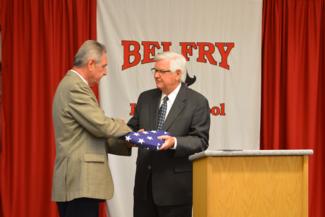 Rogers presents Coach Haywood with a flag flown over the U.S. Capitol in his honor