“Eastern Kentucky was one of the original epicenters of the opioid epidemic, with powerful prescription painkillers taking hundreds of lives and wrecking countless families through the pain of addiction. Rapidly, the overdose rates have skyrocketed nationwide becoming the leading cause of injury death in America, killing 175 people every day. I applaud President Trump for raising the stakes and declaring the epidemic a public health emergency. It builds upon the momentum of Operation UNITE in Eastern Kentucky, the National Rx Drug Abuse and Heroin Summit, the Congressional Caucus on Prescription Drug Abuse and our congressional efforts to save lives, treat addiction, expand recovery efforts, enhance education and prevention in our communities, and tackle the illicit drug trade.”

In recent years, Congress has appropriated more than $8 billion annually across the federal government toward anti-drug enforcement, treatment, education and research efforts. 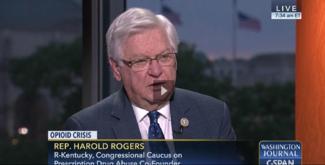