SOMERSET, KY -- This weekend, Southwestern High School graduate Luke Jacobs will leave Pulaski County for Colorado Springs where he has accepted an appointment to the United States Air Force Academy. Before reporting to basic training in Colorado, Jacobs met with Congressman Hal Rogers who nominated him for the prestigious military academy appointment.

"Luke surpassed all the criteria to become a cadet in the U.S. Air Force Academy with flying colors. He achieved remarkable academic success throughout his high school career, earned the Eagle Scout Award and emerged as a leader among his classmates through athletics, extracurricular activites and volunteer service," said Congressman Rogers. "There is no greater honor than serving in the U.S. Armed Forces. I'm incredibly proud of Luke and his desire to join the ranks of our stellar Air Force."

Cadets at the United States Air Force Academy receive a world-class education that prepares them for careers as leaders working for the most advanced air force in the world. As pilots and engineers, cyber specialists, and space operation officers, they’re able to make an immediate impact and shape the future of this country.

"When my grandparents first showed me a brochure about the Air Force Academy, I was immediately inspired to learn how I could earn a congressional nomination. I'm so thankful that Congressman Rogers invested his confidence in me by offering one of his highly coveted nominations for the military academies," said Jacobs. "I'm eager to report to the Academy and to serve my country."

Jacobs is scheduled to report for basic training on Sunday, June 21, 2020.

For more information about how to apply for a service academy nomination, visit halrogers.house.gov. 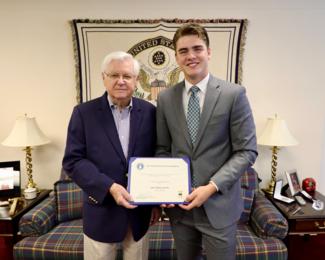