"Reed is one of only four students in Kentucky's Fifth Congresssional District who received my Congressional nomination and acceptance into a military academy. It takes impeccable grades and a high school career marked by leadership and volunteer service to enter the ranks of our prestigious Air Force Academy," said Rogers. "He came highly recommended by leaders throughout his community for being an outstanding young man of high character, with great conviction for serving others."

Campbell has received a number of accolades for his achievements, including becoming a Governor's Scholar, a Hugh O'Brian Youth Leadership Delegate, a regional president for Future Farmers of America, a Senior Airman for the Civil Air patrol and Captain of the Cross Country Team.

Campbell will become one of the U.S. Air Force Academy's newest cadets after graduating from Lincoln County High School. 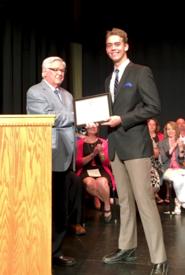 Rep. Rogers presents Reed Campbell with a certificate of acceptance into the U.S. Air Force Academy