WASHINGTON, DC -- On Tuesday, U.S. Rep. Harold "Hal" Rogers (KY-05) and Nancy Hale, President and CEO of Operation UNITE, stood together on Capitol Hill to advocate for stronger federal policies and funding to combat the drug abuse epidemic in the Appalachian region.

Rogers introduced Hale to testify before the Subcommittee on Economic Development, Public Buildings, and Emergency Management during a hearing entitled, The Opioid Epidemic in Appalachia: Addressing Hurdles to Economic Development in the Region. Earl Gohl, Federal Co-Chair of the Appalachian Regional Commission (ARC), also served as a witness during the hearing.

"I believe that the opioid epidemic is indelibly tied to the future economic development of Appalachia, and that ARC could be doing more to help organizations like UNITE tackle the challenges associated with substance abuse," said Rogers, co-founding co-chair of the Congressional Caucus on Prescription Drug Abuse. "One thing is painfully clear: the continuation of our addiction crisis and a vibrant Appalachian economy cannot coexist. The need for more targeted action is urgent, as innocent children are left behind in the wake of deadly overdoses, and as more employers search for a drug-free workforce, both in Appalachia and across the country. I think this hearing is an important first step and I am grateful that you have made it a priority."

Hale testified about Operation UNITE's success utilizing a holistic approach, including investigations, treatment and education. The comprehensive organization is now a national model.

UNITE has provided Drug-Free Workplace training to more than two dozen companies to educate both employees and supervisors about addiction, the signs and symptoms of drug use, the effects and costs of substance abuse in the workplace, and how to identify available support services in the area.

"According to information released in August from the Appalachian Regional Commission, overdose and opioid-related overdose mortality rates for ages 15 to 64 are 52.1 per 100,000 people in Appalachian Kentucky. That is the second highest in Appalachia and more than DOUBLE the amount for the non-Appalachian areas of the United States," said Hale. "Unfortunately, our problem is not unique. Many communities are facing the same consequences from this epidemic. That is why UNITE’s efforts must continue: the enemy is evasive and persistent."

"Support from the Appalachian Regional Commission – both financially and through collaborative partnerships – has enabled UNITE to create hope and change the culture, not only in our corner of southeastern Kentucky, not only across Appalachia, but on a national stage," Hale said in conclusion.

To watch the hearing, visit halrogers.house.gov. 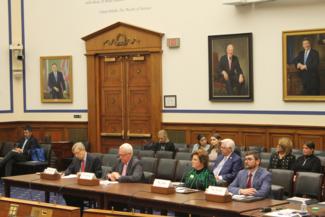 Hale testifies during a Congressional hearing 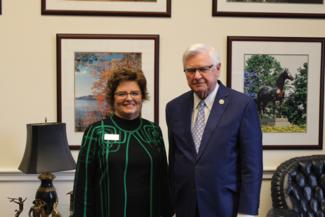 Nancy Hale and Congressman Rogers in his DC office